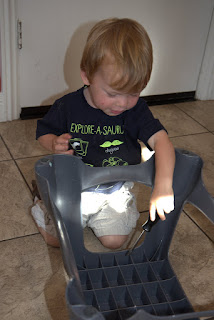 The kid is serious infatuated with screwdrivers.  If a toy needs a new battery he goes running to Bob's toolchest to get a screwdriver.  We were at the park a few weeks ago and discovered that one of the swings was broken.  He was very insistent that we should go home and get his screwdriver so he could fix it!

He's also fascinated with his power drill, which he also calls a screwdriver.  I've lost track of the number of things he has "fixed" with it.
Posted by karin at 10:05 PM